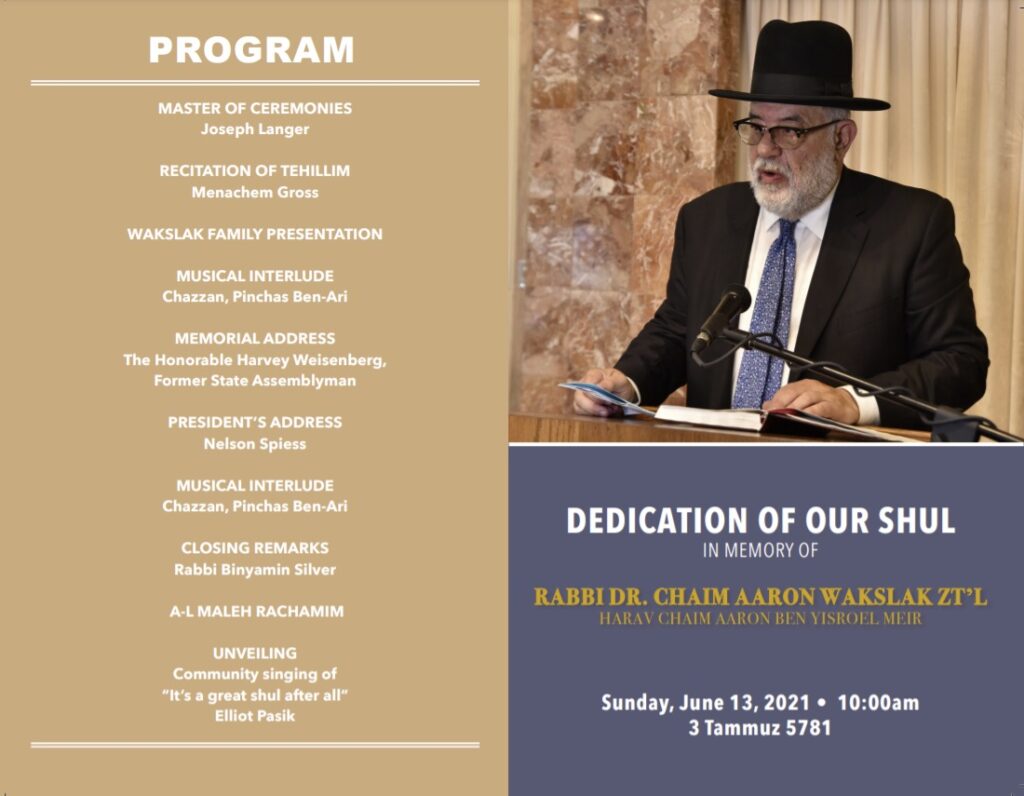 LINK TO RECORDING OF EVENT (begins 7.5 min in)

Article in the Five Towns Jewish Times about the Dedication:

Dedication in Honor of Rabbi Wakslak, zt’l, in Long Beach

The Young Israel of Long Beach rededicated  its building l’zecher nishmas Rabbi Dr. Chaim Wakslak, zt’l. Rabbi Wakslak was the heart and soul of the Long Beach community for over three decades and was a rabbinic guide and resource to the entire community. The current Young Israel building and local mikvah were built under his leadership, and he established and maintained the local kashrus authority.

Attendees at the dedication included local and state level politicians, community rabbis, past and current members, and the broader Long Beach community.

Former state assemblyman Harvey Weisenberg gave a warm speech recounting the many initiatives he worked on together with Rabbi Wakslak and the Rebbetzin, yibadel l’chaim.

Rabbi Dr. Mordechai Wakslak shared how his father, Rabbi Wakslak, zt’l, was the spiritual link to the kehillah and endlessly provided each member with whatever they needed to assist them and allow them to be spiritually elevated. Rabbi Dr. Wakslak noted that it was a source of great pride to Rabbi Wakslak, zt’l, that his parnassah was not from the rabbanus

(Rabbi Wakslak, zt’l, was the clinical director of HASC as well) and this enabled him to be a constant giver without taking from the community that he loved so much.

Current president, Mr. Nelson Spiess, shared meaningful words and concluded with a berachah that the Young Israel continue to flourish and, in a play on words, that “zeh ha’gadol, katan yiyeh,” that the great shul will become too small to accommodate for its future growth.

In his closing remarks, Rabbi Binyamin Silver, current rabbi of the Young Israel, noted that while it is not typical to rename a shul after a rabbi, Rabbi Wakslak was not an ordinary rabbi. He put his entire character into every aspect of the Young Israel and the shul was built upon who he was. Thus, it is very appropriate to rename the Young Israel l’zecher nishmaso.

After the speeches, the attendees went outside for the unveiling of the new name and sang a rendition of “It’s a Great Shul After All” a song written by Rabbi Wakslak and performed annually at the Purim mesibah. The event was a powerful tribute to a great man and leader. May he continue to be a meilitz yosher for the Young Israel and the greater Long Beach community.